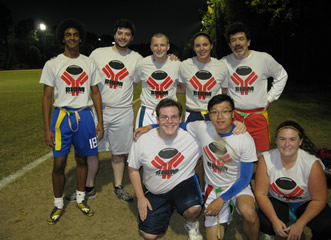 BTEC graduate students hope to rack up an impressive record on the gridiron as well as in the classroom. The BTEC Antibodies, a flag football team of 12 students in the Master of Biomanufacturing program, have posted one win to date in the fall season and are showing signs of improvement. The team plays in the NC State intramural league.

The new Antibodies team formed early in the semester and now face off weekly against other teams in seven-on-seven matches. The league, for students, staff and faculty, holds games at the NC State intramural fields. Three match-ups in the six-game season have been rescheduled due to weather, but when play has commenced, the sport has provided a much-needed break from studying.

The Antibodies are looking at continuing the camaraderie by playing volleyball as the intramural league switches to the winter season. It sounds like this is the beginning of a great new tradition. Go Antibodies!